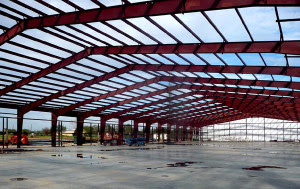 NO BETTER WAY TO BUILD.

RHINO Building Systems is a Family Owned and Operated company, in Denton for over 20 years, that has earned the highest honor from the Better Business Bureau, an A+ rating. RHINO prefabricated metal buildings work for virtually any building application and are specifically designed to meet all wind load, snow load, and seismic requirements for the area in which it’s built. There’s simply no better way to build than with RHINO. NO ONE OFFERS A BETTER COMBINATION OF QUALITY, SERVICE AND PRICE.   Approx 1/3rd of Rhino sales come from repeats and/or
referrals – from over 20 years of Operation and buildings in 46 states.
Advantages to the RHINO Prefabricated Steel Building System include:
FASTER: RHINO buildings are normally delivered within six to seven weeks after receiving the order, but standard buildings can be shipped in four. All the framing components are cut, welded, and drilled at the factory, so everything arrives at the job site clearly marked and ready for bolt-together assembly. Cut construction time by as much as 33% by choosing a RHINO.
STRONGER: Steel is stronger and more durable. RHINO is built straight and stays straight for the lifetime of the building. It provides better protection from severe weather, mold, and pests. RHINO steel building are maintenance free and built to last.
GREENER: RHINO’s American-made framing contains over 80% of recycled material. Steel is recycled more than glass, plastic, and paper combined. Unlike other recycled materials, steel can be recycled repeatedly without losing any of its inherent strength. RHINO’s Pro-Value Insulation Package provides better insulation and can save almost half of energy consumption.
FLEXIBLE: Prefabricated steel framing is self-supporting. RHINO standard building designs clear-span from ten to hundred-fifty feet without needing support columns or load-bearing walls, so all the interior space is usable. With one support column in the center, RHINO buildings can be up to 480 feet wide. Later expansion is both easy and economical by simply ordering more framing to add at either end wall.
OPTIONS:    You can choose from a wide selection of highest quality doors, windows, insulation and overhead doors which can be ordered and delivered with your building.
Visit www.RhinoBldg.com for more information.